Dr. Kwon is one of the pioneers in integrative medicine, both by his training and in his history of leadership within the MSAc and MSOM programs at NUHS.

Born in a small town in South Korea, Dr. Kwon’s father was an oriental medicine practitioner. Kwon grew up absorbing much of his father’s knowledge. However, when he began his own medical career, he chose a foundation in basic sciences. He earned both a bachelor’s degree in biology and a master’s degree in microbiology from Chung Ang University in Seoul. Afterwards, he studied diabetes and cancer at the Yunsei University in Seoul and at the University of Calgary in Canada, and worked in a research lab for eight years.

While in Canada, Kwon hurt his ankle and received chiropractic treatment. This prompted him to look into chiropractic medicine. “I realized that the study and practice of chiropractic and acupuncture could work very well together, like the completion of a puzzle,” says Dr. Kwon.

In 1998, he moved to Chicago and simultaneously studied for and received both a doctor of chiropractic degree from National University of Health Sciences as well as a master’s degree in acupuncture and oriental medicine from Midwest College of Oriental Medicine in 2002. Afterwards, he worked for three years as a family practice resident at National University. In 2010, Dr. Kwon earned his PhD from Tianjin University of Traditional Chinese Medicine.

“The fact is that when you are out there practicing as an acupuncturist or oriental medical practitioner, you will have to interact with DCs, NDs and MDs. If you have no access to them while you are in school, and don’t understand their perspective, you will be at a disadvantage,” he says.

“The second unique attribute of our programs is our emphasis on clinical practice-based learning. Traditionally, Chinese medicine was mostly taught in a master/apprentice relationship. Our students observe and train in the clinic from the second trimester on, so we can more closely simulate the benefits of that traditional learning environment. This is also why we keep a very low student to clinician ratio, so we can best duplicate that apprentice-type training.”

“Many American students have little exposure to eastern cultural history and philosophy. Oriental medicine demands that you change your way of thinking. Western medicine is based in rationalism and Greek logic and the scientific method. But the eastern path is about concepts of yin and yang, the five phases, as well as intuition and sensory information. So to better understand eastern medicine you need a ‘Copernicus overhaul.’ You need to completely change the way you think.” Dr. Kwon explains that Copernicus was the only scientist in his time who proposed that the earth rotated around the sun, instead of the solar system revolving around the earth. This revolutionary theory put the sun rather than the earth at the center of the known universe.

Why does Dr. Kwon recommend NUHS over other acupuncture or oriental medical schools? “We have a very high education standard. For example, we have the same amount of hours in western science as other acupuncture schools, but the level at which we study them is higher. We learn about radiology and MRI and how to look at films, what is normal and what is abnormal. While we who practice acupuncture and oriental medicine aren’t expected to base a diagnosis on laboratory tests, our patients often bring in their medical records, and we have to able to read and understand them, ” says Dr. Kwon. 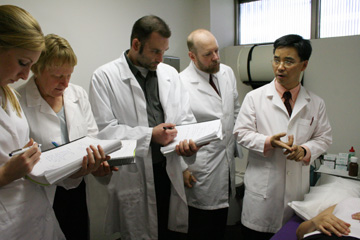 “At NUHS we have graduate medical school facilities and science laboratories, and one of the largest medical libraries in the Chicago area. Our students study anatomy in a full gross anatomy laboratory, with human dissection. Our on-campus integrative medical clinic has very nice treatment rooms and its own herbal dispensary. Right now we have 10 faculty members working with our students, and will add one more later,” adds Dr. Kwon. This number doesn’t include the dozens of other researchers and faculty members working in other departments on campus. He points out that these sorts of benefits are clear advantages for students who choose to study in a university like National, as opposed to smaller acupuncture colleges with less resources.

“Because our educational standards are higher, our entry requirements are also higher. We are one of the very few acupuncture and oriental medical schools in the country to require a bachelor’s degree for admission,” says Dr. Kwon.

“Starting these new programs has been really exciting, especially since I have the opportunity to really engage my educational philosophy about eastern and integrative medicine.”